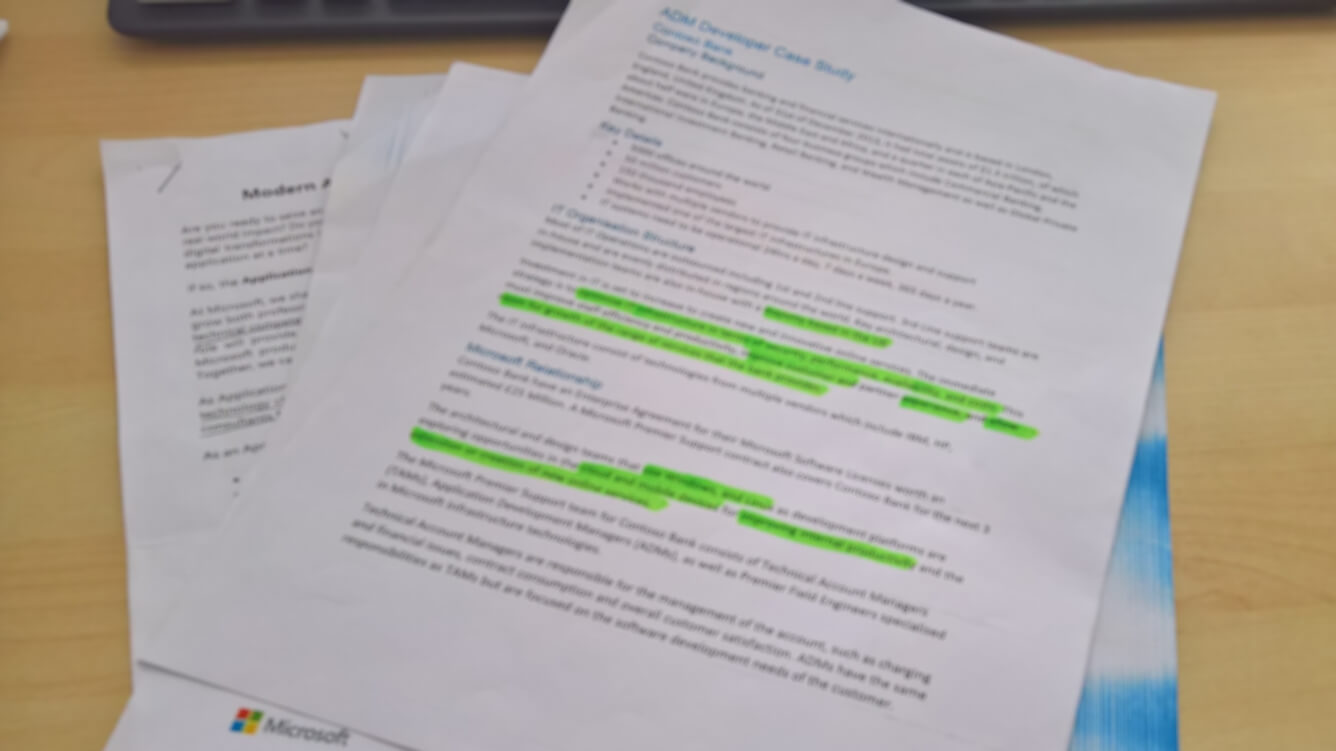 As I made reference to in Who you know, versus what you know and My "Hit Refresh" moment, I interviewed with Microsoft a few months ago for an Application Development Manager role. This is a fascinating role (though that should be obvious as why on earth would I interview for a boring one?!) that really has the potential to stretch you every which way from Sunday, it's always a good sign when you're going through the job spec underling the bits you like about it and realise that there's not that many bits left without an underline on them!

The interview process I went through for this role was made up of three parts:

It does seem a little bit like Microsoft like to do things in threes, or maybe that's just the urge to see a pattern, even where none exists.

I've grouped these two together as they're, overall, somewhat less daunting, than the half-day interview itself. They were also both carried out by someone named Ben, though that's probably a slightly weaker reason for grouping these together than the former.

The initial phone chat (with Ben, the manager) was probably about 30 minutes long, give or take. He asked me some questions, I asked him some questions, we also both answered each others questions. He added some more meat onto the bones that is the job description for the role, and obviously I convinced him that I knew what I was talking about as he offered up details about the next steps in the interview process, the Skype interview and the on-site in Reading.

So, the Skype interview. This was, of course, sent through as a Skype for Business invite. There's absolutely no link between that and the fact that I have a post that talks about being unable to sign-in to Skype for Business when you've got two factor authentication configured. Nope. None whatsoever, no siree, Bob! After finally giving up on getting my Skype for Business instance to sign-in, and having approximately 30 seconds left before I was due to join the Skype meeting, I finally managed to get the Web Client to download and login. Cue a deep sigh of relief - there's nothing quite like planning ahead, turning up early and then finding out that you can't get the door to the meeting room to open! I won't even mention the fact that at this point I couldn't hear Ben until he'd disconnected and reconnected which ratcheted my blood pressure up another tiny notch, in any more detail than I have.

So, I can hear Ben, Ben can hear me and from there on in this was relatively painless. It's been the best part of three months since so I can't detail each and every question I was asked, but there was a wide and varied set. Some of the questions had to be answered with "Sorry, I don't know", which of course meant that the answer came to me moments after the interview ended.

There was a great opportunity towards the end of the call to ask Ben some questions as well. One of the questions I asked was "What are the frustrations that you face in the job?". The answer that stuck in my mind here was "Internal Tools", which initially it surprised me a little. I guess everyone thinks of Microsoft, Google, Apple, Facebook and other tech companies of that scale as the "nirvana" where internal tools will be perfect and fade into the background allowing people to just get on with it and do their day jobs without frustration. The reality is that as with all companies they're not perfect, which is strangely reassuring.

Again, I seem to have passed muster and got invited for an on-site interview in Reading a couple of weeks later.

The visit to Reading

I'll let you into a little secret here, my other half works for Microsoft. This means I had a tiny advantage in that I got (a) driven to the interview, avoiding any stress around getting lost, not being able to find a parking space, or getting lost between the parking space and reception, and (b) I managed to grab a sausage bap and a cup of coffee to set me up for a morning of interviewing. So, breakfast and caffeine fuelling completed I made my way to reception and signed-in (should've asked to keep the badge afterwards, Rob!). I was met by one of the teams interns, Andy, who I spent a relaxed five or so minutes talking with before heading up to the first part of the interview.

Technical interviews, love them or loathe them, are a necessity. I have to confess that it's the first time I've ever had to white-board some code, but putting to one side my near inability to write a { that resembles something other than a poor imitation of Sanskrit on said whiteboard, I don't think it was actually that bad. I won't go into detail about the questions I was asked, as I'm sure they're probably not generated for each candidate, other than to say that moments after I left the building I was saying to myself "Why didn't you mention double-checked locking?".

What was really telling about the technical interview was that it didn't feel like the objective was to "catch me out", more so it felt like the objective was to encourage me to give as much as I could. I know I made several school boy errors, including repeatedly forgetting the specified constraints of the scenario, but the people interviewing me asked questions or gave cues that pushed me back towards the question I was supposed to be answering. Interviews, like exams, are a contrived scenario that isn't much fun for the person on the receiving end so interviewers who are cognisant of that fact make it a lot easier on the candidate, i.e. Me!

Overall: I felt like this went pretty well, I felt like I hit most of the marks that I should've done. 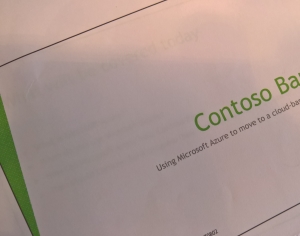 Once the technical interview was over, the next step was the Presentation. For this I'd been given a case study, in advance, to prep against. Preparation complete, I'd prepared a slide deck, researched the industry that the company in the case study was in vis-à-vis usage of Microsoft services within that industry. I'd stressed out that the slides were sub-par, I'd re-written them, I'd added slides, removed slides, all the usual things you do. 10pm the night before I said to myself "Stop, work with what you've got", cleared the desktop wallpaper on my laptop (cute as my cat is, if I'm roleplaying a presentation to a large company, it's not really appropriate to have her on screen) and made sure that things like Skype were closed. I was mildly nervous that the Windows Insider build I was on would cause me issues, but it was too late to re-pave.

Going into the room, one of the interviewers from the technical interview was also present which provided some continuity. This definitely made the process easier overall. Laptop plugged in, slides showing on the big screen and off I went. The presentation was required to last a minimum of 30 minutes, which I was fairly comfortable with. On the day I'm sure I was talking a mile a minute and probably came in closer to 25, or less. The brief stated "please allow time for question" into which I'd inferred "at the end", so being asked questions part way through threw me slightly. Not a problem, I answered questions, along with giving the answer that I really, truly, utterly (you get the idea!) hate to give, "I don't know". As it was a role-playing exercise, it was actually "I don't know, but I'll find out and get the answer to you", but still, I don't like not knowing, or admitting to that!

Overall: Not too bad, definitely could've been better though. having been in the same company and industry for ten years I've grown comfortable presenting to people, and customers, I know about subject matter I know intimately. Moving outside that comfort zone was un-nerving.

After the technical interview and the presentation, it can only get easier, right? This felt a lot more relaxed, the pressure was off and it seemed to be more about me as a person than me as a geek, or me as a representative of Microsoft presenting to a customer. Some of the ground that was covered was very similar to that from the initial phone chat, some of it was different, but what helped was the genuine warmth and personal interest shown. One of the questions I got asked was "What's your favourite recipe?", as I mention mixology on my CV and have a recipe blog here, I wasn't sure which one to answer with so went for Alligator Cooler (Midori, Lemonade, Lemon & Lime Sours - heaven on a hot summers day!) and Lamb Shanks respectively, I think! I honestly couldn't tell you what points were covered during the conversation in detail, but suffice to say that intentional or otherwise, it was more relaxed than the first two parts.

Overall: I think this part went well. It definitely helps when all the people in the room are engaging with you and the conversation isn't solely around the mechanics of the company / the role

I'm calling this "the aftermath" purely for dramatic effect, it worked, right? The day after the interview in Reading I got a call from Ben (Ben the manager of the team, not the Ben who carried out the interview via Skype) to give me feedback.

TL;DR: We're not going to make an offer.

Longer version: I made nearly one and a half pages of notes during his call, all of which is invaluable as it's constructive feedback on areas that I can improve in from people working for one of the biggest companies in technology in the world. Let me repeat that, one of the biggest companies in technology in the world. If feedback of that ilk isn't liquid gold, I don't know what is. Very nicely, Ben said it was "Not a no, it's a 'not yet'", that it was a borderline decision and that they talked for some time before they made their decision. That's a compliment in and of itself. I got feedback on areas that I need to strengthen, some of which I've mentioned in other posts, and also feedback on what my areas of strength were. No, I didn't get a job out of the experience, but I got something almost as good - that feedback. It's made me determined to ask for feedback, if I'm not offered, at the end of each and every interview process I go through. It's also made me determined to be a better interviewer in the future and actively offer feedback to people I've interviewed that's as comprehensive as that which I received.