Using Microsoft.Build.Traversal in lieu of solutions for building your projects

Somewhere recently I came across a reference to the Microsoft.Build.Traversal SDK which has been sat in an open tab in my browser ever since. Traversal:

Supports creating traversal projects which are MSBuild projects that indicate what projects to include when building your tree. For large project trees, they are replacements for Visual Studio solution files.

So, grossly over-simplifying Traversal is a way of replacing solution files with an MSBuild project, which means you can make use of all the funky stuff MSBuild can do to eliminate the need for a build.cmd or other custom scripts, at least in some circumstances.

Getting setup to try out Traversal

In order to try it out, we need a couple of projects to work with. To keep the steps to get to where we want to be short, I'm going to describe them as a series of dotnet CLI commands but they could just as easily be carried out in Visual Studio. I've run these commands from the Developer Command Prompt for VS 2017 from the folder that I store all my projects in:

These commands should hopefully be fairly obvious, but in summary what's being done is:

Once these commands have been run it's quick and easy to run start traversal.sln to spin-up Visual Studio, though if you have Visual Studio 2017 and another earlier version installed the solution may open in the wrong one - you definitely want 2017 (or greater!) for this to work. And here's the solution/project structure as seen in VS2017: 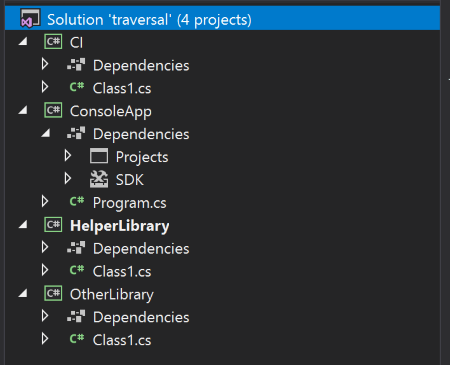 Next up is some tirdy-up and setup:

Once that's done you can set ConsoleApp as the startup project, drop a breakpoint on the closing brace of the Main method (or add Console.ReadLine(); to the end of the method instead) and run the project to confirm that the dependencies are all being resolved and that the solution works correctly. Now that's done it's time to add Traversal into the mix.

I added the CI project in anticipation of using it as the Traversal project, adding it to the solution to make it easy to access so we'll remove it once we're done with editing it. First up, right-click on the project and choose Edit CI.csproj from the context menu. Now edit the project file so it looks like this:

All that's left to do now is to build the project, which is:

Or of course, -c Release if you want to go for a release build! With a little bit of luck you should ses output something along the lines of: