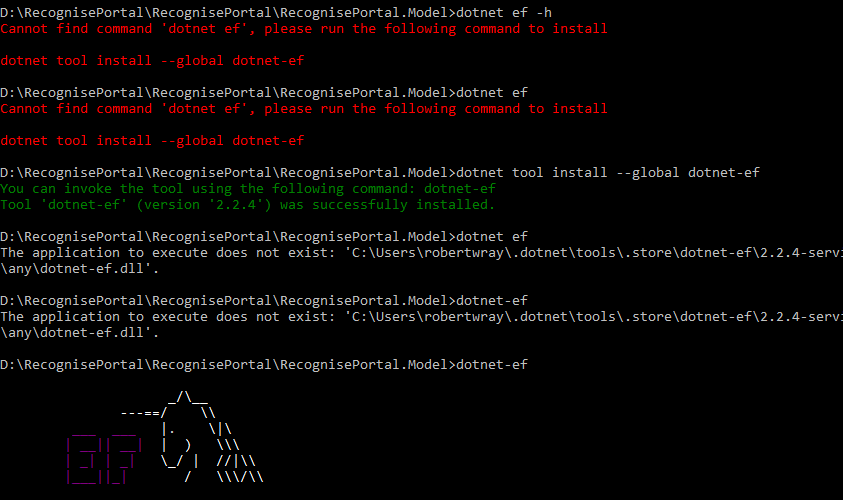 So in my post yesterday I noted that dotnet ef wasn't present anymore and following the instructions to install it gave me a broken installation of dotnet ef.

The hack I used of copying files around to satisfy the paths that were being winged about were because, even with the specific details of the error message a cursory search wasn't returning anything useful. It wasn't until I hit GitHub to raise an issue against the tooling that I found details that explain what's going on. The fact that dotnet ef isn't present automatically is a change as part of .NET Core 3 (devblogs.microsoft.com/dotnet announcement, docs.microsoft.com EF Core 3.0 breaking changes).

So, in order for the tool to work properly it needs to be installed requesting a version explictly (at the moment, hopefull this is a requirement that'll go away once 3.0 leaves preview) which means I need to un-pick what I've done and re-run the install. First up, deleting the 2.2.4-servicing-10062 folder I created in %userprofile%\.dotnet\tools\.store\dotnet-ef so that everything is back as it was as the tooling intended. Then I'm going to uninstall the incorrectly installed version of 2.2.4 with dotnet tool uninstall dotnet-ef --global which should give a response of:

Finally I can install the correct version by running dotnet tool install dotnet-ef --version 3.0.0-preview4.19216.3 --global which should give the following response:

Finally, running dotnet ef doesn't moan about something missing without me having to copy files around manually: